After using the XorHack for a while I realised it was missing some things so I decided it was time for an update. New syscalls have been added to give finer control over data access, now providing 8, 16, 32 and 64 bit reads and writes. Also some new ioctls were added to provide additional useful functions for your userland code. Lastly new userland applications were added which now give the ability to read, write and execute memory from the command line

At the innermost level some more syscalls are now added to the hypervisor when initially exploiting the PS3. These use different syscall numbers to the previous exploit code in order to group them all together rather than scattering them all over the place. This should make keeping track of them easier. There are now nine syscalls added to the PS3 upon exploiting. These are added as syscalls 32 to 40 inclusive. Previously syscalls 16 and 20 were used for 64bit peek and 64bit poke, but these syscalls are no longer setup.

In the middle level I added interfacing support to the nine new syscalls as well as a new ioctl to let user apps convert lpar addresses to real addresses and yet another to let user apps perform an ioremap on memory. I also fixed the syscall that executes code via a real memory address since previously it wasn’t saving the link register, which is not good.. Lastly I tracked down the problem I was having with calling ioctls from userland code. It turns out there are issues sending ioctls to a 64bit kernel from 32bit userland code. When you send the ioctl from your userland code there is a hidden function that attempts to “make it compatible” before sending it on to the kernel. This was transparently causing some ioctls to not make it to my kernel code. Things like this are why I hate linux hehe. It looked like fixing this was going to require a rebuild of sections of the kernel, so instead I brute force tried all ioctl numbers until I found a nice bunch that made it through ok and settled for using them instead. When sending these ioctls a handle to the XorHack device is used, so I am not too worried about them going astray and wreaking havoc.

Finally the on outermost level  I added support for calling the new syscalls to read and write 8, 16, 32, or 64 bits at a time. In doing so I support unaligned addresses without the user having to check or worry about such things. If the address being accessed is aligned it will access it in a single syscall of the specified size. If the address is unaligned it will either use multiple syscalls or a syscall of a larger access size. I also added functions to easily check if the system has been exploited yet, to perform the lpar address to real address translation, io-remapping of addresses and to execute code at a given real address. A new header file xorhack_sc.h was added which contains translations between syscalls as they would be used in kernel mode and the userland interface. I have only done a few here, but it should be enough to follow the pattern and create translations for any other syscalls. If anyone does complete these translations, please send it to me to include in the next version of XorHack.

As well as the above additions and changes to userland code I have added three new command line applications; ps3peek, ps3poke and ps3exec which allow reading, writing and executing of memory. The ps3peek and ps3poke tools work in a similar fashion. Both are able to perform 8bit, 16bit, 32bit and 64bit data accesses and can access multiple amounts of the data size in one call. The ps3peek tool can print data to screen as hex values and ascii characters similar to the display of a hex editor, or be printed as binary data and redirected into a file. The ps3poke tool does not print data to screen but can write data to memory from values passed on the command line or values read from a file.

Here are some examples of what these tools can be used for.

This reads 0x10000000 bytes (16MB) of data starting at address zero using a data access size of 8 bytes (64bits) and prints it in binary form which gets redirected into the hvdump.bin file. Note that the 64bit access is used since it requires 8 times less syscalls to get the same amount of information as if we used the default 8bit access.

Reading the status register for spu0

Scripts can be written using ps3peek, ps3poke and ps3exec and utilising files to store values between calls. By doing so many tasks can be done such as the setting of the required registers to load metldr.

The following is a picture taken with my dodgy G1 iPhone camera to show peek and poke in action. One day I will get a decent camera… 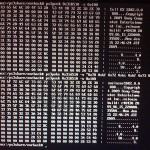